Original fic(Iron Man): A light character piece about Pepper, with a little Pepper/Tony. Set after Iron Man 3, has MAJOR spoilers!

Original fic(Agents of S.H.I.E.L.D.): "I'll handle the matter internally." That's even sort of what happens.

Original fic(Avengers): She will not understand what they did to her until years later, when she sees her own stolen file marked ï¿½suspected beta - neutered, age nine.ï¿½

Original fic(Agents of S.H.I.E.L.D.): Grief, and other aphrodisiacs.

Now and at the Hour of Our Death
Recorded for Awesome Ladies Podfic Anthology VII. Cover art by BessyBoo.
Original fic(Daredevil): When Karen Page is twelve years old, stupid Bobby Williams sticks gum in her hair and the stupid principal cuts it out with a dull pair of scissors. 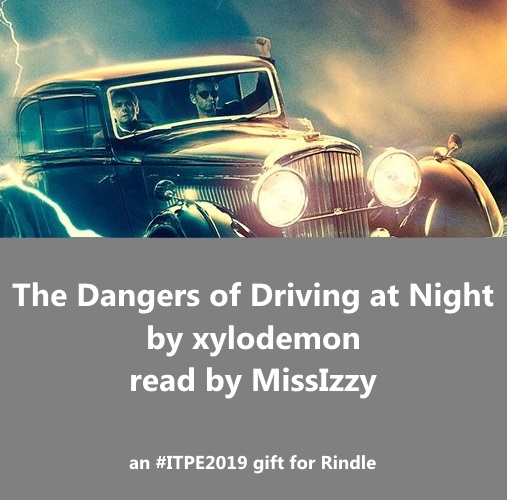 Recorded for #ITPE2019
Original fic(Good Omens): In which Crowley teaches Aziraphale how to drive.

Constellations
Original Fic(Critical Role): Short Beau-centered ficlet.
give the pride to the lioness
Original Fic(Marvel MCU): On the whole, Maria thought she had everything in hand until a ghost followed Steve Rogers home.
Both recorded for Awesome Ladies Podfic Anthology XI. Cover art by bluedreaming.

Original fic:(Critical Role): Percy says he is a dragon. He means it.

Return to The Writings of MissIzzy.